Information Wars: How We Lost the Global Battle Against Disinformation and What We Can Do about It 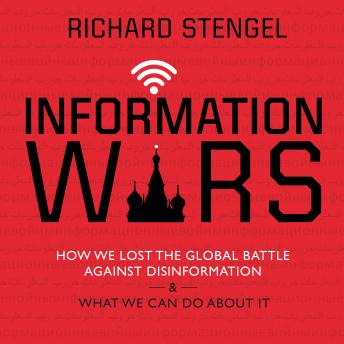 During the final three years of the Obama administration, Richard Stengel, the former editor of Time magazine and an Under Secretary of State, was on the front lines of the new global information war. At the time, he was the single person in government tasked with unpacking, disproving, and combating both ISIS's messaging and Russian disinformation. Then, in 2016, as the presidential election unfolded, Stengel watched as Donald Trump used disinformation himself, weaponizing the grievances of Americans who felt overlooked. In fact, Stengel quickly came to see how all three players had used the same playbook: ISIS sought to make Islam great again; Putin tried to make Russia great again; and we all know about Trump.

In a narrative that is by turns dramatic and eye-opening, Information Wars walks listeners through this often frustrating battle. Stengel moves through Russia and Ukraine, Saudi Arabia and Iraq, and introduces characters from Putin to Hillary Clinton, John Kerry and Mohamed bin Salman to show how disinformation is impacting our global society. He illustrates how ISIS terrorized the world using social media, and how the Russians launched a tsunami of disinformation around the annexation of Crimea-a scheme that became the model for their interference with the 2016 presidential election.

Information Wars: How We Lost the Global Battle Against Disinformation and What We Can Do about It