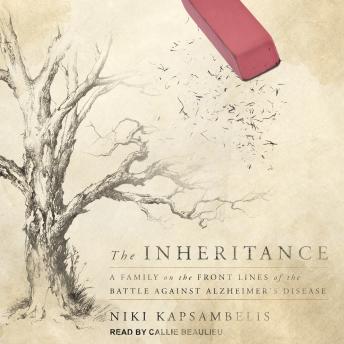 The Inheritance: A Family on the Front Lines of the Battle Against Alzheimer's Disease

Every sixty-nine seconds, someone is diagnosed with Alzheimer's disease. Of the top ten killers, it is the only disease for which there is no cure or treatment. For most people, there is nothing that they can do to fight back. But one family is doing all they can.

The DeMoe family has the most devastating form of the disease that there is: early onset Alzheimer's, an inherited genetic mutation that causes the disease in 100 percent of cases, and has a 50 percent chance of being passed onto the next generation. Of the six DeMoe children whose father had it, five have inherited the gene; the sixth, Karla, has inherited responsibility for all of them. But rather than give up in the face of such news, the DeMoes have agreed to spend their abbreviated years as part of a worldwide study that could utterly change the landscape of Alzheimer's research and offers the brightest hope for future treatments-and possibly a cure.

Drawing from several years of in-depth research with this charming and upbeat family, journalist Niki Kapsambelis tells the story of Alzheimer's through the humanizing lens of these ordinary people made extraordinary by both their terrible circumstances and their bravery.

Inheritance: A Family on the Front Lines of the Battle Against Alzheimer's Disease

This title is due for release on April 14, 2017
We'll send you an email as soon as it is available!