Injustice: Exposing the Racial Agenda of the Obama Justice Department 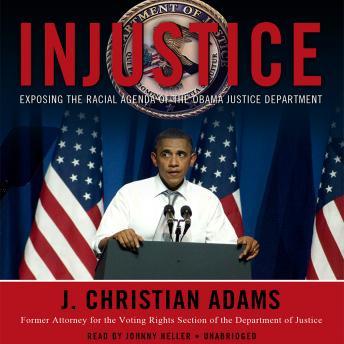 Justice is supposed to be blind, especially to race and politics. Yet as Department of Justice (DOJ) whistle-blower J. Christian Adams divulges in his shocking exposé, Injustice, justice under the Obama administration is anything but blind. Here, Adams reveals the never-before-published truth about the corrupt, racist, and politicized inner workings of the Obama Justice Department, as well as the untold story of the DOJ’s corrupt handling of the New Black Panther voter-intimidation case. As a former Department of Justice attorney in the civil rights division, Adams has witnessed firsthand how the DOJ is aggressively executing a racist and radical left-wing agenda through its policies and employees. After watching the DOJ continually turn a blind eye to voter fraud, blatant racism, and voter rights abuses, Adams finally blew the whistle during the New Black Panther case—a case that Adams brought to the DOJ’s attention and ultimately resigned over because of the corruption and perjury he witnessed leading up to and following the case’s orchestrated dismissal. Revealing unknown and startling examples of racism and corruption at the local, state, and federal level, Injustice exposes a Justice Department that is anything but just.

Injustice: Exposing the Racial Agenda of the Obama Justice Department