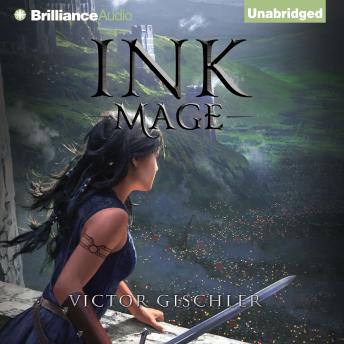 #1 of A Fire Beneath the Skin

In the first installment of the A Fire Beneath the Skin trilogy, the city of Klaar has never fallen. No enemy has ever made it across the Long Bridge or penetrated the city’s mighty walls. Even when a powerful invading army shows up at the gates, the duke and his daughter, Rina Veraiin, are certain that it poses little threat.

But they are cruelly betrayed from within and, in a horrific spasm of violence, the city is brought to its knees.

With the help of her bodyguard, Kork, the battle-trained young Rina narrowly escapes the slaughter and makes her way to the lair of an ancient sorcerer—the Ink Mage—who gifts her with a strange, beautiful set of magical tattoos.

Now a duchess in exile, Rina sets out on a quest to reclaim what is rightfully hers, aided by a motley assortment of followers who will help her in her cause—some for noble reasons and others for their own dark purposes.

With the enemy’s agents nipping at her heels, Rina must learn to harness her new and startling magical powers if she is to assert her rightful place as ruler of Klaar.

This book was initially released in episodes as a Kindle Serial. All episodes are now available for immediate download as a complete book.

The core story is pretty good. The tattoo magic in innovative and exciting. However, to me, I felt the extra fluff was really irrelevant and irritating. The innuendos and detailed gore makes me question the authors need to express himself in such a way. The reader was clear, but to me sounded clipped and limited on her imagination.

Very interesting story that I enjoyed very much. The readings were good and never left my bored. I would recommend this to anyone who is into fantasy a

I really enjoyed this novel. The adventure and story was riveting, leaving me wanting more. The narrator brought the characters to life. I can hardly wait for the next chapter in Rena's story.

A great Fantasy novel full of characters fighting to survive, even when filled with fear. This is a story of magic, friendship, love,