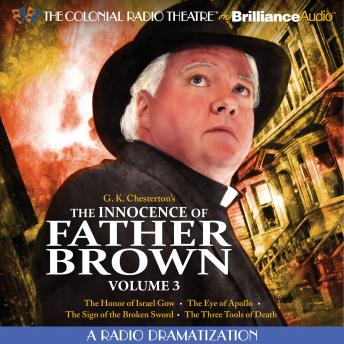 The Innocence of Father Brown, Volume 3

From London to Cornwall, then to Italy and France, a short, shabby priest takes on bandits, traitors, and killers. Why is he so successful? The reason is that after years spent in the priesthood, Father Brown knows human nature and is not afraid of its dark side. Thus he understands criminal motivation and how to deal with it. The award-winning Colonial Theatre on the Air has dramatized G.K. Chesterton''s Father Brown stories from The Innocence of Father Brown with a full cast, music score, and sound effects.

Included in Vol. 3:
THE HONOR OF ISRAEL GOW
Father Brown and Flambeau find themselves helping Inspector Cardwell at Glengyle Castle, investigating the strange death and burial of the late Earl, a reclusive man who lived as a hermit with only one servant…Israel Gow.

THE EYE OF APOLLO
Flambeau, the thief-turned-detective, shares an office building with the high priest of a new religion. But is the death of one of his disciples’ murder or a fortunate accident?

THE SIGN OF THE BROKEN SWORD
A murder is committed using a legendary broken sword.

THE THREE TOOLS OF DEATH
A man is murdered, a man confesses to the murder and is arrested, but Father Brown doesn''t believe either claim.