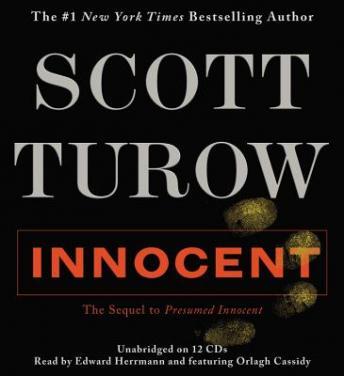 The 'unputdownable courtroom drama' (Stephen King) and riveting sequel to the landmark bestseller Presumed Innocent, in which Tommy Molto and Rusty Sabich come head-to-head in a second murder trial.
The sequel to the genre-defining, landmark bestseller Presumed Innocent, INNOCENT continues the story of Rusty Sabich and Tommy Molto who are, once again, twenty years later, pitted against each other in a riveting psychological match after the mysterious death of Rusty's wife.

Loved this book, because Scott Turow knows how to write about what is in the hearts of good, decent, everday people. I noted other reviewers stated this book was merely a "love story" but cannot agree with that categorization. It's a great read.

Kathy is right! This isn't a murder mystery. Mysteries keep you guessing until the end when all is resolved but this is a danged romance novel in disguise! Less touchy-feely, more investigation, blood, and mystery.