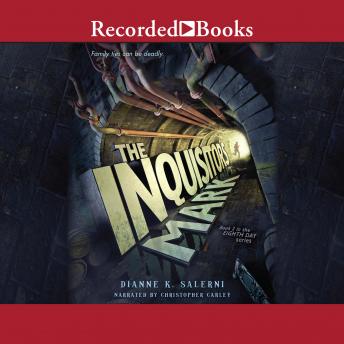 AFTER AN ALL-OUT WAR WITH THE EVIL Kin lord in Mexico, Jax Aubrey is back in Pennsylvania with his guardian, Riley, and liege lady, Evangeline. Although they're in hiding, a man named Finn Ambrose tracks them down, claiming to be Jax's uncle and giving Jax hope that he actually has a family after all. But Uncle Finn may have an ulterior motive. As it turns out, Jax's great-aunt is the reigning leader of the Dulacs, the enemy clan who assassinated Riley's family. When the Dulacs kidnap Jax's best friend, Billy, to lure Jax to New York, it becomes clear that the Dulacs, family or not, will stop at nothing to get what they want. Hoping to trade himself for Billy-while keeping Riley and Evangeline out of danger-Jax goes to Manhattan on his own, where he meets Uncle Finn; his nearly identical twin cousin, Dorian; and the rest of his supposed relatives. There, he stumbles upon a maze of magic tunnels below his family's apartment building. Uncle Finn and the sinister Dulacs have been keeping secrets from him-and one of them might be the location of Evangeline's long-lost sister, Addie. With the Eighth Day-and the entire Emrys bloodline-hanging in the balance, Jax struggles to comprehend who he really is despite all that he knows. An Ambrose? A Dulac? An Aubrey? OR AN INQUISITOR WHO WILL STOP AT NOTHING TO KEEP HIS LIEGE SAFE?