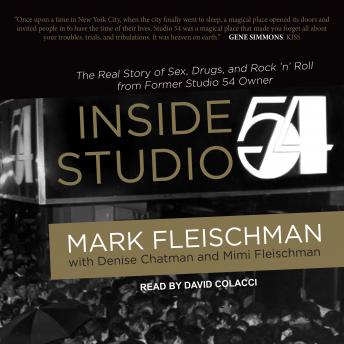 In Inside Studio 54, the former owner takes you behind the scenes of the most famous nightclub in the world, through the crowd, to a place where celebrities, friends, and the beautiful people sip champagne and share lines of cocaine using rolled-up hundred-dollar bills. In the early eighties, Mark Fleischman reopened Studio 54, the world's most glamorous and notorious nightclub, after it was closed down by the State of New York. Ten thousand people showed up that night, ready to restart the party that abruptly ended after the raid in 1978 landed its former owners in jail.

Inside Studio 54 invites you to revisit the happening scenes of the 1960s, '70s, and '80s, the post-Pill, pre-AIDS era of free love, consequence-free sex, and seemingly endless partying. Following Fleischman as he built connections as a hotel, restaurant, and club owner that lead him to Studio 54. Inside Studio 54 takes the listener from Brazil to the heights of debauchery in the Virgin Islands and finally to New York City. A star-studded thrill ride through decadent and drug-fueled parties at the legendary Studio 54.