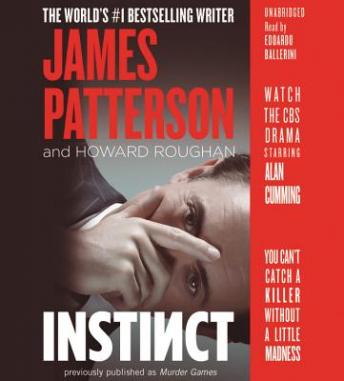 Dr. Dylan Reinhart wrote the book on criminal behavior. Literally--he's a renowned, bestselling Ivy League expert on the subject. When a copy of his book turns up at a gruesome murder scene--along with a threatening message from the killer--it looks like someone has been taking notes.

Elizabeth Needham is the headstrong and brilliant NYPD Detective in charge of the case who recruits Dylan to help investigate another souvenir left at the scene--a playing card. Another murder, another card--and now Dylan suspects that the cards aren't a signature, they're a deadly hint--pointing directly toward the next victim.

As tabloid headlines about the killer known as 'The Dealer' scream from newstands, New York City descends into panic. With the cops at a loss, it's up to Dylan to hunt down a serial killer unlike any the city has ever seen. Only someone with Dylan's expertise can hope to go inside the mind of a criminal and convince The Dealer to lay down his cards. But after thinking like a criminal--could Dylan become one?

A heart-pounding novel of suspense more shocking than any tabloid true crime story, Instinct introduces the next unforgettable character from the imagination of James Patterson, the world's #1 bestselling author.

Great book; typical Patterson, keeping you on the edge wanting more. I loved the various twists and turns as the case unfolded.

Too much unnecessary detail

What a great book! I couldn't stop reading. Narrator was also great.

Great book and fabulous narration. Suspenseful and enjoyable to listen

Great book! From the beginning I was worried it would be too graphic but it turned out to be a great mystery following the detectives primarily. It was exciting and suspenseful! Also the narrator was excellent, he did a really great job differentiating the character voices.

WHAT A PHENOMENAL BOOK I LOVED IT AWESOME AWESOME!!