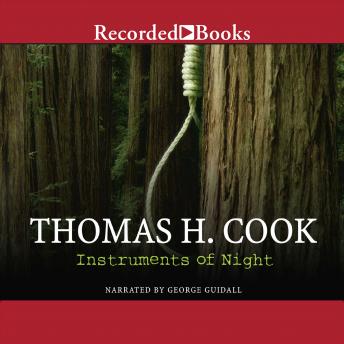 Thomas H. Cook's mesmerizing novels have attracted many Edgar Award nominations, and his Chatham School Affair won the Edgar Award for Best Novel. Filled with the haunting characters that have become Cook's trademark, Instruments of Night creates a fusion between past and present that is unique and chilling. Author Paul Graves has achieved modest popularity for a crime series that pits a perceptive detective against his nemesis, a mastermind of evil. What readers don't know, however, is that writing provides Paul's only release from the horrors of his memory. Now, as he is hired to pen the ending to an unsolved murder case, Paul begins to find the border between the mystery and his own past growing precipitously narrow. The strands of this finely-crafted novel move seamlessly between scenes from Paul's latest crime novel and his investigation of the murder. In voicing the rich tapestry of character, emotion, and suspense, veteran narrator George Guidall creates a superbly rewarding audio experience. You'll also enjoy an interview with the author at the conclusion of the audiobook.

This title is due for release on May 6, 2011
We'll send you an email as soon as it is available!