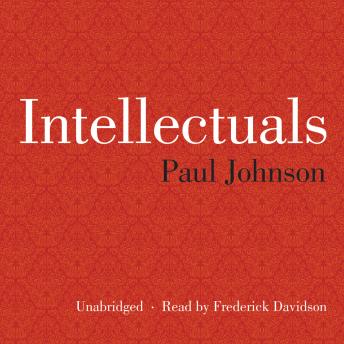 Since the time of Voltaire and Rousseau, the secular intellectual has increasingly filled the vacuum left by the decline of the cleric and assumed the functions of moral mentor and critic of mankind. This fascinating portrait of the minds that have shaped the modern world examines the moral credentials of those whose thoughts have influenced humanity. How do intellectuals set about reaching their conclusions? How carefully do they examine the evidence? How great is their respect for truth? And how do they apply their public principles to their private lives? In an intriguing series of case studies and incisive portraits, these people are revealed as intellectuals both brilliant and contradictory, magnetic and dangerous.Included are:1. Jean-Jacques Rousseau: An Interesting Madman2. Shelley, or The Heartlessness of Ideas3. Karl Marx: Howling Gigantic Curses4. Henrik Ibsen: On the Contrary!5. Tolstoy: God's Elder Brother6. The Deep Waters of Ernest Hemingway7. Bertolt Brecht: Heart of Ice8. Bertrand Russell: A Case of Logical Fiddlesticks9. Jean-Paul Sarte: A Little Bar of Fur and Ink10. Edmund Wilson: A Brand from the Burning11. The Troubled Conscience of Victor Gollancz12. Lies, Damned Lies, and Lillian Hellman13. The Flight of Reason