Intelligence is the ability to adapt to change 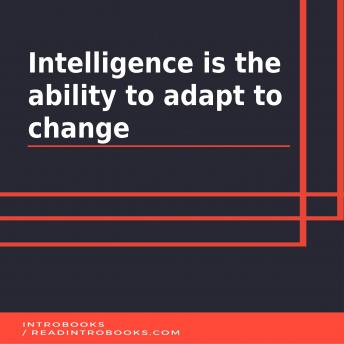 Intelligence is an important thing that relates to mental ability. It is a hypothetical idea that expresses certain types of behavior of a man. This is the way of imagination to practical life. Albert Einstein says, 'Imagination is more important than knowledge'. At the same time, intelligence is a major part of brain power! Using this brain power, common people can be a legend; a poor country may be rich. Look at Japan! What Japan had after the Second World War! It was nothing!
Japan started from zero, and changed its own color! Yes, now Japan is the most remarkable country in the world. How Japan made it possible? Japan took advantages of intelligence! Imagination is more powerful to bring the change what is urgent to make the change. Famous scientist Stephen Hawking says, "Intelligence is the ability to adapt to change." It's true always! Intelligence has the ability to create a lot! Brain power can do everything. Moreover, intelligence may be a little word, but it has the ability to change the full view.

Intelligence is the ability to adapt to change

This title is due for release on August 25, 2019
We'll send you an email as soon as it is available!