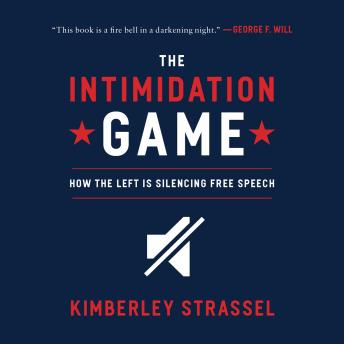 The Intimidation Game: How the Left Is Silencing Free Speech

From Kim Strassel-one of the preeminent political columnists writing today and member of the Wall Street Journal editorial board-comes an insightful, alarming look at how the Left, once the champion of civil liberties, is today orchestrating a coordinated campaign to bully Americans out of free speech.

For nearly 40 years, Washington and much of the American public have held up disclosure and campaign finance laws as ideals, and the path to cleaner and freer elections. This book will show, through first-hand accounts, how both have been hijacked by the Left as weapons against free speech and free association, becoming the most powerful tools of those intent on silencing their political opposition. The Intimidation Game provides a chilling expose of political scare tactics and overreach, including:


- How Citizens United set off a wave of liberal harassment against conservative politicians
- The targeting of Tea Party groups by the IRS
- How Wisconsin prosecutors, state AGs, and a Democratic Congress shut down political activists and businesses
- The politicization by the Obama administration of a host of government agencies including the FEC, FCC and the SEC

The Intimidation Game will shine a much-needed light on how liberal governance and the Democratic machine bullies the political process.

Intimidation Game: How the Left Is Silencing Free Speech