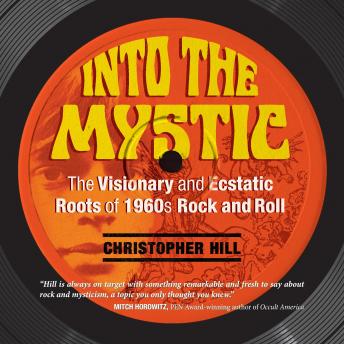 Into the Mystic: The Visionary and Ecstatic Roots of 1960s Rock and Roll

Explores the visionary, mystical, and ecstatic traditions that influenced the music of the 1960s

• Examines the visionary, spiritual, and mystical influences on the Grateful Dead, the Beatles, the Rolling Stones, Bob Dylan, Van Morrison, the Incredible String Band, the Left Banke, Lou Reed and the Velvet Underground, and others

The 1960s were a time of huge transformation, sustained and amplified by the music of that era: Rock and Roll. During the 19th and 20th centuries visionary and esoteric spiritual traditions influenced first literature, then film. In the 1960s they entered the realm of popular music, catalyzing the ecstatic experiences that empowered a generation.

Exploring how 1960s rock and roll music became a school of visionary art, Christopher Hill shows how music raised consciousness on both the individual and collective levels to bring about a transformation of the planet. The author traces how rock and roll rose from the sacred music of the African Diaspora, harnessing its ecstatic power for evoking spiritual experiences through music. He shows how the British Invasion, beginning with the Beatles in the early 1960s, acted as the “detonator” to explode visionary music into the mainstream. He explains how 60s rock and roll made a direct appeal to the imaginations of young people, giving them a larger set of reference points around which to understand life. Exploring the sources 1960s musicians drew upon to evoke the initiatory experience, he reveals the influence of European folk traditions, medieval Troubadours, and a lost American history of ecstatic politics and shows how a revival of the ancient use of psychedelic substances was the strongest agent of change, causing the ecstatic, mythic, and sacred to enter the consciousness of a generation.

The author examines the mythic narratives that underscored the work of the Grateful Dead, the French symbolist poets who inspired Bob Dylan, the hallucinatory England of the Beatles’ Sgt. Pepper, the tale of the Rolling Stones and the Lord of Misrule, Van Morrison’s astral journeys, and the dark mysticism of Lou Reed and the Velvet Underground. Evoking the visionary and apocalyptic atmosphere in which the music of the 1960s was received, the author helps each of us to better understand this transformative era and its mystical roots.

Into the Mystic: The Visionary and Ecstatic Roots of 1960s Rock and Roll