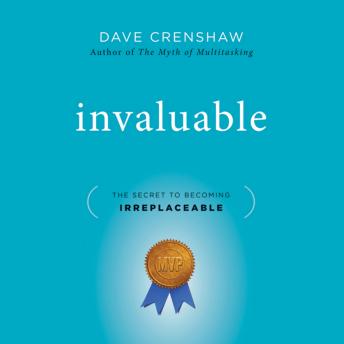 Invaluable: The Secret to Becoming Irreplaceable

In his first book, The Myth of Multitasking, Dave Crenshaw showed readers how to gain more time in their lives, making them more present in both work and life. Multitasking discussed the budget of all 168 hours in a week; essentially the total work-life balance. Invaluable focuses just on the hours spent working, and how to maximize the value of every hour. A business fable, Invaluable expands upon a back story of The Myth of Multitasking (those who have read both will find familiar characters). Invaluable focuses on the experiences of Jason, a former intern recently hired at GreenGarb. Like many young twenty-something employees, Jason is frustrated with his job. As a college graduate, he feels he should be making more money, his skills and knowledge are being underutilized, and that he is underappreciated by his boss, Tracy, and his company. Jasons journey toward becoming Invaluable begins when he expresses his frustration during a visit to his octogenarian great-grandfather, Charlie. Charlie shares a story of his experience, at Jasons age, working in a textile factory during and after World War II. He shares how he started to build his career by being the guy who looked for opportunities to serve instead of complaining about small annoyances. Charlie plants the seed of a new perspective in Jason mind: before he can get a raise, he must prove he deserves the raise. He must show his boss that he is invaluable, rather than expecting to be paid what he thinks he is worth. Jason skeptically brings this concept up to his boss the next day. This begins a journey of discovery for both Jason and Tracy. They start as skeptics and debate their way to a starting premise. Then contact with Helen (the CEO), Phil (the business coach). Jason and Tracy begin to build a framework of working together in a way that will help them both improve job security and get a raise. Gradually, the way they view their jobs and their company changes. Jason and Tracy realize that their wage is determined by their personal productivity, not their CEO. They also learn that in order to advance their own position and become truly invaluable, they must help each other.  The book will include an appendix of worksheets and examples, giving the reader concrete tools to apply immediately.

Invaluable: The Secret to Becoming Irreplaceable