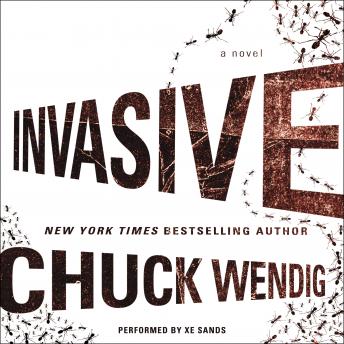 “Think Thomas Harris’ Will Graham and Clarice Starling rolled into one and pitched on the knife’s edge of a scenario that makes Jurassic Park look like a carnival ride. Another rip-roaring, deeply paranoid thriller about the reasons to fear the future.” -- Kirkus Reviews (starred review)

Hannah Stander is a consultant for the FBI—a futurist who helps the Agency with cases that feature demonstrations of bleeding-edge technology. It’s her job to help them identify unforeseen threats: hackers, AIs, genetic modification, anything that in the wrong hands could harm the homeland.

Hannah is in an airport, waiting to board a flight home to see her family, when she receives a call from Agent Hollis Copper. “I’ve got a cabin full of over a thousand dead bodies,” he tells her. Whether those bodies are all human, he doesn’t say.

What Hannah finds is a horrifying murder that points to the impossible—someone weaponizing the natural world in a most unnatural way. Discovering who—and why—will take her on a terrifying chase from the Arizona deserts to the secret island laboratory of a billionaire inventor/philanthropist. Hannah knows there are a million ways the world can end, but she just might be facing one she could never have predicted—a new threat both ancient and cutting-edge that could wipe humanity off the earth.