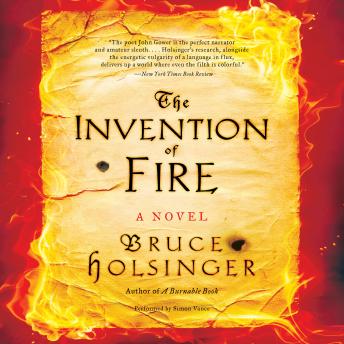 The Invention of Fire: A Novel

The author of the acclaimed medieval mystery A Burnable Book once again brings fourteenth-century London alive in all its color and detail in this riveting thriller featuring medieval poet and fixer John Gower—a twisty tale rife with intrigue, danger mystery, and murder.

Though he is one of England’s most acclaimed intellectuals, John Gower is no stranger to London’s wretched slums and dark corners, and he knows how to trade on the secrets of the kingdom’s most powerful men. When the bodies of sixteen unknown men are found in a privy, the Sheriff of London seeks Gower’s help. The men’s wounds—ragged holes created by an unknown object—are unlike anything the sheriff’s men have ever seen. Tossed into the sewer, the bodies were meant to be found. Gower believes the men may have been used in an experiment—a test for a fearsome new war weapon his informants call the “handgonne,” claiming it will be the “future of death” if its design can be perfected.

Propelled by questions of his own, Gower turns to courtier and civil servant Geoffrey Chaucer, who is working on some poems about pilgrims that Gower finds rather vulgar. Chaucer thinks he just may know who commissioned this new weapon, an extremely valuable piece of information that some will pay a high price for—and others will kill to conceal. . .

Invention of Fire: A Novel