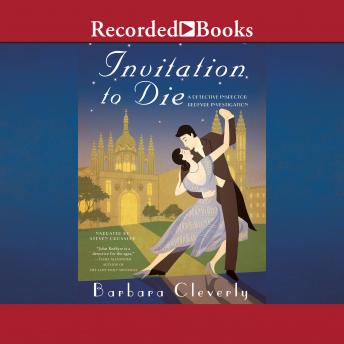 An 'invitation to dine' quickly loses a letter as DI John Redfyre returns for his second investigation in the hallowed halls of Cambridge academia. Cambridge, 1924 in early summertime. May Balls, punting, flirting and dancing the tango are the preoccupations of bright young people, but bright young Detective Inspector John Redfyre finds himself mired in multiple murders. One morning, his dog discovers a corpse neatly laid on a tombstone in the graveyard adjoining St. Bede's College. An army greatcoat and well-worn boots suggest the dead man may have been a former soldier, though the empty bottle of brandy and a card bearing the words 'An Invitation to Dine' on the victim ring a discordant note. Even more unsettling is the autopsy, which reveals death by strangulation and unusual contents in the stomach from the man's last meal. Redfyre learns that this murder is one of several unsolved cases linked to a secretive and sinister dining club at St. Bede's. Redfyre, himself an ex-rifleman, becomes caught in a dark tale of revenge, betrayal and injustice-a lingering mystery from a long-forgotten war. With the unlikely assistance of his lead suspect, he gradually unearths the dead man's story and fights to right an ancient wrong.