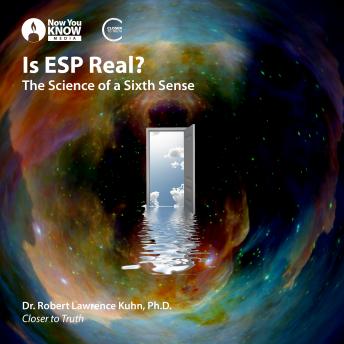 Is ESP Real? The Science of a Sixth Sense

Is Extra-Sensory Perception or “ESP” real?

The possibility of ESP fascinates us, providing the plot for countless films and television shows. Think of The Shining or The Twilight Zone. No one denies how much ESP has captured the popular imagination, but is there any factual basis for it?

Some say yes—even leading scientists. Recently, researchers have begun giving serious attention to what was once thought a pseudo-science. As human concepts of reality keep expanding, the existence of ESP appears ever more plausible.

In this series of three fascinating episodes, Dr. Robert Lawrence Kuhn—neuroscientist and author of 25 books—hosts 11 guest experts for a discussion of ESP and its challenge to the scientific or physical-only worldview: not least its implications for the extension of consciousness beyond death.

Drs. Marilyn Schlitz and Dean Radin star in all three episodes of Is ESP Real? The Science of a Sixth Sense. Pillars of the series, the two bring their diverse academic training in anthropology and electrical engineering to bear on the strange and exciting topic of psychic phenomena that belie traditional understandings of taste, touch, smell, sight, and sound.

Along the way you’ll also hear from nine other experts, including the founder of The Skeptics Society; the winner of the 1982 U. S. National Book Award in Science; and the one-time Director of the National Institute on Drug Abuse (NIDA).

Now is your chance to explore the science of a so-called “sixth sense” with the pioneers of parapsychology.

Is ESP Real? The Science of a Sixth Sense