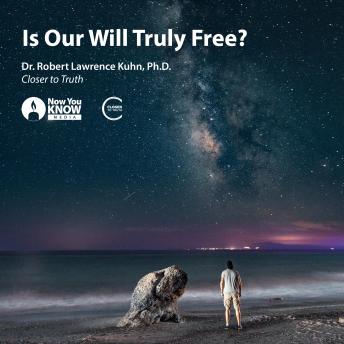 Is Our Will Truly Free?

Acclaimed brain scientist and host Robert Kuhn invites you to join world-leading philosophers and scientists: Christof Koch, Chief Scientist of the Allen Brain Institute, Ned Block of NYU, Peter van Inwagen of Notre Dame, and Daniel Clement Dennett III of Tufts, and many more. In this series, you'll explore one of humanity's most profound questions: Do you create your own destiny? Or does the universe deal you a hand that you have to play with?

As you explore competing philosophies, you will find that every answer raises fascinating new questions about morality, fate, consciousness, and the existence of a higher power.

Recent neuroscientific discoveries only fan the flames of the philosophical debate. Most scientific thought is predicated on the assumption that every action is determined by a prior action. But if that's true, what does it imply about free will?

In this series of three episodes, host Dr. Robert Lawrence Kuhn welcomes a total of 18 guest experts to discuss free will. Each episode is crafted as a series of one-on-one interviews.

The implications of this debate are far-reaching and potentially paradigm-shifting. Now is your chance to unpack the details with the greatest minds the world has to offer.

Is Our Will Truly Free?

This title is due for release on November 16, 2018
We'll send you an email as soon as it is available!