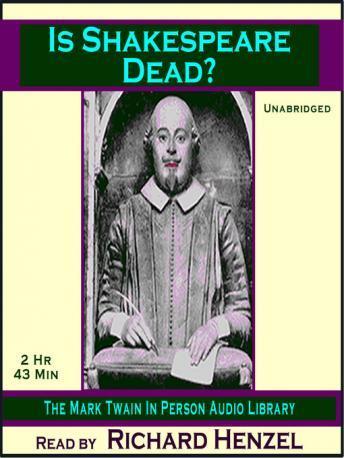 As a cub pilot, one of Mark Twain's masters was a pilot named George Ealer, who recited Shakespeare by the hour - from memory - and who was a virulent opponent of the notion that the so-called Shakespeare plays and poems were in truth written by Sir Francis Bacon. At first young Sam Clemens agreed with his teacher and boss, but he soon realized that it was no fun for the pilot to argue with someone who agreed with him all of the time. And so, young Sam Clemens became quite skilled in defending this position: he said he was not a Shakespearite nor a Baconite, but that he was a "Brontosaurian": didn't know who did write them, but knew Shakespeare didn't. He explained, "It is the very way Professor Osborn and I built the colossal skeleton brontosaur that stands fifty-seven feet long and sixteen feet high in the Natural History Museum, and is the awe and admiration of all the world, the stateliest skeleton that exists on the planet. We had nine bones, and we built the rest of him out of plaster of Paris. We ran short of plaster of Paris, or we'd have built a brontosaur that could sit down beside the Stratford Shakespeare and none but an expert could tell which was biggest or contained the most plaster."

This title is due for release on February 28, 2011
We'll send you an email as soon as it is available!