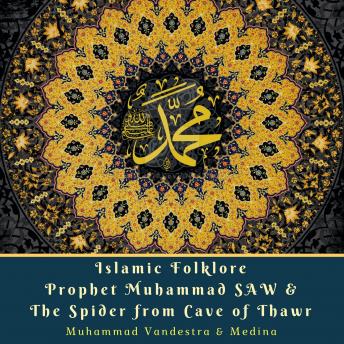 {If you help him (Muhammad) not (it does not matter), for Allah did indeed help him when the disbelievers drove him out, the second of two, when they (Muhammad and Abu Bakr) were in the cave, and he (peace be upon him) said to his companion Abu Bakr (May Allah be pleased with him), 'Be not sad (or afraid), surely Allah is with us.' Then Allah sent down His Sakinah (calmness, tranquility, peace, etc.) upon him, and strengthened him with forces (angels) which you saw not, and made the word of those who disbelieved the lowermost, while it was the Word of Allah that became the uppermost, and Allah is All-Mighty, All- Wise.} (Holy Quran 9.40)

I am a spider who is higher in rank than other spiders. With all humility, if all the spiders in this world were put in one hand and I was put in the other I would outweigh them in superiority. I am not one to make false claims and show-off, I am simply stating facts. I do not think that I need to introduce myself to the reader, for I am sure you understand that I am the spider of the cave that the Messenger of Allah (peace be upon him) hid in. I am the one, who was responsible for the Prophet's deliverance. I am the one, who Allah (God) sent to protect him.

My web is very flimsy and light and the slightest breeze can blow it away. However, despite the weakness of my web, I managed to ward off the iron swords of the atheists that went out in pursuit of the Prophet, and moreover, I was able to defeat them! The outcome of the conflict between the spiders' weak silk and the iron of the swords was the defeat of iron. My house is considered a parable of weakness, 'Verily, the frailest (weakest) of houses is the spider's house.' I sat in my house protecting the noble house of Islam and guarding the Prophet of Allah, Muhammad ibn ' Abdullah (peace be upon him).That was not all that happened to me. Something even more wonderful happened; I saw the Prophet. I know that after the Prophet's death, millions will visit his grave to cry and pray.