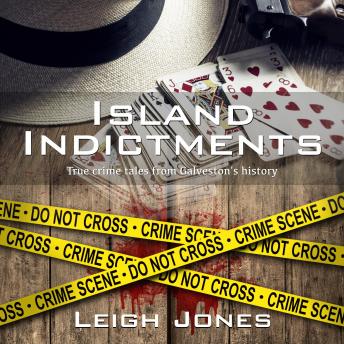 A runaway airman slaughters a family of three as they sleep in their beds.

A single mother murders her two young sons and hides their dismembered bodies in her refrigerator.

An elderly man beats his granddaughter to death with a hammer because her childish singing annoys him.

Those are just three of the violent crimes that rocked Galveston in one year: 1955.

Galveston, Texas, has a storied history marked by captains of industry and mafia bosses. Their exploits are legendary. But those now-infamous stories weren’t the only ones to make headlines over the decades. The island city’s ordinary citizens left their mark as well, often on their friends and neighbors. Their stories are just as much a part of Galveston’s history as its deadly storms and favorite sons.

Island Indictments recounts the tales of 25 crimes that shocked the city and left juries wrestling with justice. Some killers paid for their crimes with their lives. Others walked free.

Take a trip across the causeway for a true crime journey through seven decades of Galveston’s past.

One thing’s for sure: The good old days weren’t always so good.