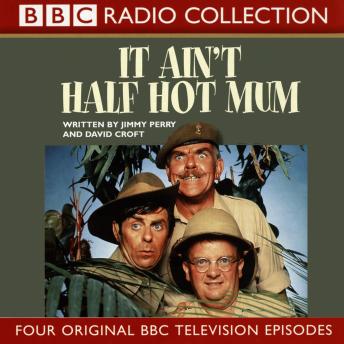 It Ain't Half Hot Mum

Meet the gang in these four classic BBC TV episodes! Enjoy the exploits of the Royal Artillery Concert Party, a motley troupe of military thespians seconded to India during the Second World War. In 'My Lovely Boy', When RSM Williams realises the love of his life is Parky's mum, he sets about recruiting him for the concert party. In 'The Supremo Show', a VIP visit calls for a very special show - but when Gloria sprains his ankle, the Sergeant Major must take his place. In 'We are Not Amused', Gloria plays Queen Victoria in a jingoistic pageant - but the men don't realise they'll be playing to an Indian VIP. In 'Money Talks', when the men discover that Gunner Graham is due to receive an inheritance, they set about winning his favour. Starring Windsor Davies, Melvyn Hayes, Don Estelle and Michael Bates.