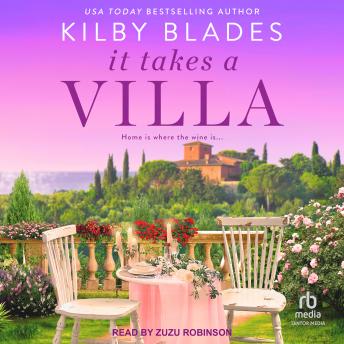 It Takes a Villa

For the reasonable price of $1, Natalie Malone just bought herself an abandoned villa on the Amalfi Coast. With a detailed spreadsheet and an ancient key, she's arrived in Italy ready to renovate-and only six months to do it. Which seemed reasonable until architect Pietro Indelicato began critically watching her every move . . .

From the sweeping ocean views to the scent of the lemon trees, there's nothing Pietro loves more than his hometown. And after seeing too many botched jobs and garish design choices, he's done watching from the sidelines. As far as he's concerned, Natalie should quit before the project drains her entire bank account and her ridiculously sunny optimism.

With Natalie determined to move forward, the gorgeous architect reluctantly agrees to pitch in, giving her a real chance to succeed. But when the fine print on Natalie's contract is brought to light, she might have no choice but to leave her dream, and Pietro, behind.

This title is due for release on September 20, 2022
We'll send you an email as soon as it is available!