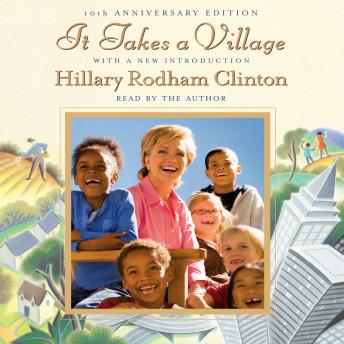 It Takes a Village

A splendid celebration of the tenth anniversary of It Takes a Village, including a new introduction read by Hillary Rodham Clinton

A decade ago, then First Lady Hillary Rodham Clinton chronicled her quest -- both deeply personal and, in the truest sense, public -- to help make our society into the kind of village that enables children to become smart, able, resilient adults. For more than thirty-five years, Senator Clinton has made children her passion and her cause. Her long experience has strengthened her conviction that how children develop and what they need to succeed are inextricably entwined with the society in which they live and how well it sustains and supports its families and individuals. In other words, it takes a village to raise a child.

In her new introduction, Senator Clinton reflects on how our village has changed over the last decade -- from the impact of the Internet to new research in early child development and education. She discusses issues of increasing concern -- security, the environment, the national debt -- and looks at where we have made progress and where there is still work to be done.

It Takes a Village has become a classic. As relevant as ever, this anniversary edition makes it abundantly clear that the choices we make today about how we raise our children and how we support families will determine how our nation will face the challenges of this century.

Over one million dollars in royalty proceeds from It Takes a Village have been donated to children's charities by Hillary Rodham Clinton. Proceeds from this edition also will be donated.

It Takes a Village

This title is due for release on December 12, 2006
We'll send you an email as soon as it is available!