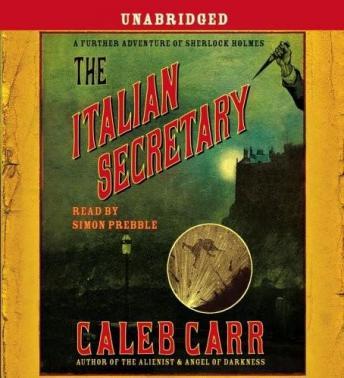 The bestselling author of the Alienist series returns with a chilling elaboration on the Sherlock Holmes canon, as the famed detective investigates a pair of gruesome murders, which cast an otherworldly shadow as far as Queen Victoria herself.

It all begins familiarly enough: Sherlock Holmes and Dr. Watson are summoned to the aid of Queen Victoria in Scotland by an encrypted telegram from Holmes' brother, Mycroft, a royal advisor. Rushed northward on a royal train they soon learn of the brutal killings of two of the Queen's servants who had been working on the renovation of the famous and forbidding Royal Palace of Holyrood.
Mycroft has enlisted his brother to help solve the murders that may be key elements of a much more elaborate and pernicious plot on the Queen's life. But the circumstances of the two victims' deaths also call to Holmes' mind the terrible murder of 'The Italian Secretary,' David Rizzio. Only Rizzio was murdered three centuries ago.
Told with his unique feel for historical detail and the architecture of human evil, Caleb Carr's brilliant new offering takes the Conan Doyle tradition to remarkable new heights.