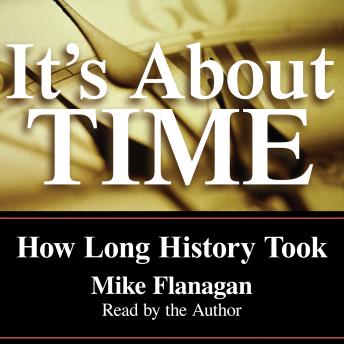 Sparked by the fateful 73-second Challenger voyage, It's About Time began as a newspaper feature chronicling key moments in history and the length of time each took to occur. This fascinating book, complete with photographs, puts scores of historical events to the clock, including the four score and seven years ago Gettysburg Address--which lasted just two minutes in 1863.

It took 43 seconds for the atomic bomb to be dropped on Hiroshima. History was forever altered in less than a minute. In contrast, it took 355 years, 10 months, and five days to end African slavery in the Americas.

These moments in history are among the nearly 200 recounted in this turn-back-the-clock look at time--and the part it played in history. Unlike most books that present events in chronological order, It's About Time ranks key historical moments by duration--from the shortest to the longest.

Featuring facts from each event and black-and-white snapshots from many of them, this book offers a yet-unseen perspective on history and the time it has taken for historical events to unfold. It's About Time is a must-read for history and trivia buffs everywhere.

Audio edition has additional updated bonus material not in print. Read by the author.