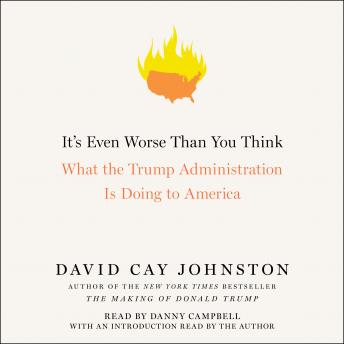 It's Even Worse Than You Think: What the Trump Administration Is Doing to America

From David Cay Johnston, the Pulitzer Prize-winning journalist and author of the bestselling The Making of Donald Trump, comes his New York Times bestseller about how the Trump Administration’s policies will affect our jobs, savings, taxes, and safety—completed revised and updated.

New York Times bestselling author and longtime Trump observer David Cay Johnston shines a light on the political termites who have infested our government under the Trump administration, destroying it from within and compromising our jobs, safety, finances, and more.

In It’s Even Worse Than You Think, Johnston exposes shocking details about the Mexican border wall, and how American consumers will end up paying for it, if it ever gets built; climate change, and all about Scott Pruitt who spent much of his career trying to destroy the agency he now heads; stocking—not draining—the swamp, despite his promise to do the opposite, Trump has filled his cabinet with millionaires and billionaires; and the Kleptocracy, where Donald Jr. and Eric run an eyes-wide-open blind trust of Trump holdings to avoid the appearance of conflict of interest—but not the reality.

With story after story, It’s Even Worse Than You Think 'diagnoses the Trump administration as a…government by the least qualified and most venal among us” (The Washington Post). This is “a momentously thorough account of President Trump’s alarmingly chaotic first year in office…a precise and fiery indictment of an unstable, unethical president that concludes with a call for us to defend our democracy” (Booklist) and is “urgent, necessary reading” (Kirkus Reviews).

It's Even Worse Than You Think: What the Trump Administration Is Doing to America