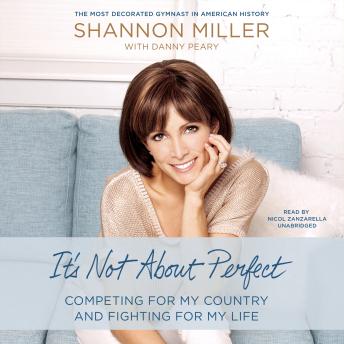 It's Not about Perfect: Competing for My Country and Fighting for My Life

"Whenthe odds were against me, I was always at my best."
When she retired at age nineteen, Shannon Miller didso as one of the most recognizable gymnasts in the country. The winner of sevenOlympic medals and the most decorated gymnast, male or female, in US history,Shannon tells a story of surviving and thriving. A shy, rambunctious girlraised in Oklahoma, Shannon fell in love with gymnastics at a young age andfought her way to the top.
In 1992 she won five Olympic medals after breakingher elbow in a training accident just months prior to the Games. Then, in 1996,a doctor advised her to retire immediately or face dire consequences if shechose to compete on her injured wrist. Undeterred, Shannon endured the pain andled her team, the "Magnificent Seven," to the first Olympic team gold medal forthe United States in gymnastics. She followed up as the first American to wingold on the balance beam.
Equally intense, heroic, and gratifying is the storyof her brutal but successful battle with ovarian cancer, a disease from whichfewer than fifty percent survive. Relying on her faith and hard-learnedperseverance, Shannon battled through surgery and major chemotherapy to emergeon the other side with a miracle baby girl.
Her story of trial, triumph, and life after cancerreminds us all that it's life's bumps and bruises that reveal our character.From early on in her career, Shannon knew that life wasn't about perfection. Inthis incredible and inspirational tale, Shannon speaks out so as to be seen andheard by thousands as a beacon of hope.

It's Not about Perfect: Competing for My Country and Fighting for My Life