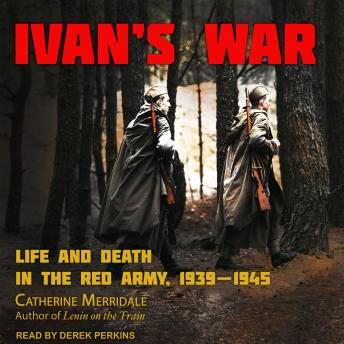 A powerful, groundbreaking narrative of the ordinary Russian soldier's experience of the worst war in history, based on newly revealed sources.

Of the thirty million who fought in the eastern front of World War II, eight million died, driven forward in suicidal charges, shattered by German shells and tanks. They were the men and women of the Red Army, a ragtag mass of soldiers who confronted Europe's most lethal fighting force and by 1945 had defeated it. Sixty years have passed since their epic triumph, but the heart and mind of Ivan-as the ordinary Russian soldier was called-remain a mystery. We know something about how the soldiers died, but nearly nothing about how they lived, how they saw the world, or why they fought.

A tour de force of original research and a gripping history, Ivan's War reveals the singular mixture of courage, patriotism, anger, and fear that made it possible for these underfed, badly led troops to defeat the Nazi army. In the process Merridale restores to history the invisible millions who sacrificed the most to win the war.