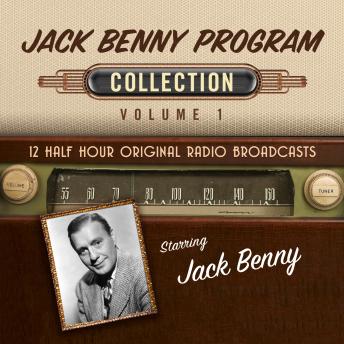 #1 of The Jack Benny Program Collection

Born in Chicago, February 14, 1894, Benjamin Kubelsky would later become known as Jack Benny. As a boy, he was encouraged by his Jewish immigrant parents from Poland to become a concert violinist. He learned to play quite well and hit the vaudeville stage, where he played popular songs and honed a suave-but-fragile personality, telling self-deprecating jokes. Benny guested on the Ed Sullivan radio show March 19, 1932 and was an instant success. Canada Dry signed him to a contract that same year and soon Jack Benny was broadcasting each week on CBS. His radio career included a long run on NBC and then a return to CBS through his final radio days. His all-star supporting cast included his wife Mary Livingstone, Eddie “Rochester” Anderson, Dennis Day, Phil Harris, Mel Blanc, Frank Nelson and announcer Don Wilson. As Jerry Seinfeld would emulate years later on his TV show, Benny’s cast received the best jokes – many pointed at the show’s star. Expert scripts constantly reminded listeners of Benny’s portrayal of himself as a stingy and vain man, concerned about his receding hairline and insistence that he was no older than 39. Benny’s radio show made a successful transition to television with his entire supporting cast following. This incredible collection of The Jack Benny Program is as funny and timely as it was when first broadcast.  2/13/49 'Jack’s Birthday is Tomorrow'
3/6/49 'At the Races' with guests, Ronald and Benita Colman
3/13/49 'After the Races'
1/15/50 Guest, Fred Allen
2/26/50 'The Whistler Spoof called The Fiddler'
3/5/50 'Buck Benny Rides Again'
3/26/50 Guest, Bob Hope
4/2/50 Guest, Al Jolson
4/16/50 'Mary Convinces Jack to Paint the House'
11/29/53 'Shopping for a Thanksgiving Turkey'
12/6/53 'Preparing for a Palm Springs Vacation'
1/20/57 'In Bed with a Cold and Hears a Burglar'