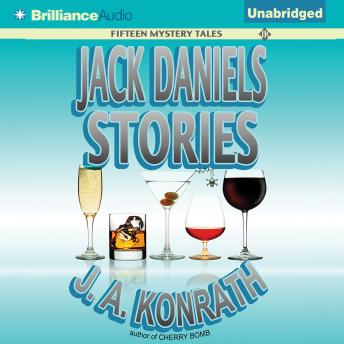 Join Jack Daniels, her partner Herb Benedict, private eye Harry McGlade, and part-time criminal Phineas Troutt, in more Jacqueline "Jack" Daniels thrillers: On the Rocks - Suicide or murder? Lt. Jack Daniels solves a locked room mystery. Whelp Wanted - P.I. Harry McGlade becomes a dognapper to stop a dognapper, or something like that. Street Music - Phineas Troutt hunts a prostitute through the dangerous streets of Chicago. The One That Got Away - The Gingerbread Man (the villain from Whiskey Sour) hunts one final victim. With a Twist - It looked like the man fell from a great height, but the body is in his living room. Epitaph - Phin Troutt takes on a Chicago street gang with vengeance on his mind. Taken to the Cleaners - Harry McGlade tries to solve a difficult mystery, but mostly just goofs off. Body Shots - Jack Daniels faces her most challenging case yet; a school shooting. Suffer - Phineas Troutt has taken some questionable jobs, but will he murder a man's wife? School Daze - P.I. Harry McGlade investigates a private school, but he's not entirely sure why. Overproof - While shopping on the Gold Coast, Jack Daniels notices traffic has come to a stand-still. When she realizes what the problem is, she's confronted with her own mortality, and the possible deaths of hundreds. Bereavement - How badly does Phineas Troutt need a fix? What is he willing to do? Pot Shot - Detective Herb Benedict just wants a home cooked meal. But his plans get interrupted by a very determined sniper. Last Request - Phineas Troutt picks up a hitchhiker, with deadly results. The Necro File - Harry McGlade investigates some bizarre murders in this hilarious, gore-filled mini-epic.

This title is due for release on May 9, 2011
We'll send you an email as soon as it is available!