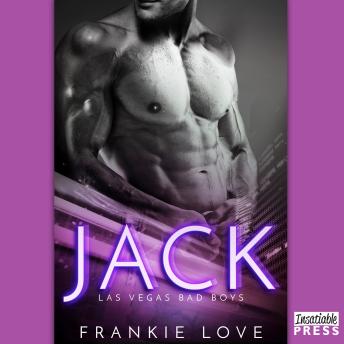 JACK On stage, I f*cking kill it. I'm Jack Harris, a world-class DJ, with a hundred million dollar offer on the table. I never have to ask for what I want. I get it, anywhere, anytime, anyone. After breaking up with my on-again, off-again girlfriend, I seize an opportunity when I see it. Sweet Tess, sitting there all alone, is ready to get swept off her feet. If only for just one night. I don't expect the paparazzi to show up the next morning, and I don't expect Tess to have secrets that make her run from the press. But d*mn, I want to protect that girl. I need to protect that girl. And I won't let anyone stand in my way. TESS Look, I know it's foolish to imagine Jack Harris ever falling for a cocktail waitress like me-but I can't help it ... that bad boy is hot. When he offers me a night I'll never forget, I'm all in. This is my wildest dream come true. One look at his naked body and I know he is going to deliver. And he does, over and over again. But after, when he cradles me in his arms, holds me tightly and kisses me softly, I know that we could be something more than a one-night stand. Except I'm not the innocent girl Jack thinks I am. I have secrets, blood on my hands, and I will do anything to keep my past buried. But it's catching up to me faster than I can run. P.S: Early reviews claim that JACK is the best book boyfriend of the Las Vegas Bad Boys. Do you agree? xo, frankie

This title is due for release on May 10, 2017
We'll send you an email as soon as it is available!