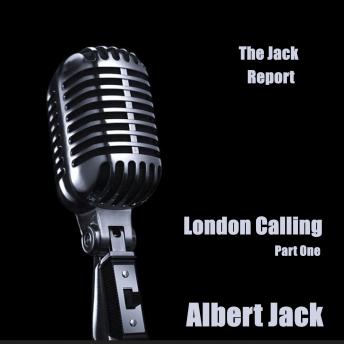 London Calling is the independent social and political observation of an observant Londoner.
Albert Jack has written 18 books, including four worldwide best-sellers, on subjects ranging between history, politics, religion and war.
'Albert Jack offers a crash-course in skeptical thinking and - although he doesn't put it like this - ways to wield Occam's Razor and focus on the real evidence.' - The Independent (London)
'The man with the answers is Albert Jack' (Daily Mail)
Go armed with the truth and an original perspective
Part One includes;
1. Why the FBI raid on Trump's lawyer threatens you, your children and civilization
2. Reasons the EU should be paying Britain for BREXIT
3. Is it time to drive Islam out of Europe?
4. UK's unfunny left-wing comedians, dying on their arse outside London
5. Millennials are taking society backwards
6. America and the clash of the clueless
7. Are Britain's unprotected sea-side towns a target this summer?
8. Rhino Horn makes you ugly and impotent
9. The Great Global Warming Hoax
10. Are Liberals too stupid to know they are stupid?
11. The Media Who Cried Wolf - A Fairy Tale
12. Hey Hollywood, who cares what you think - just dance bitch
13. Trump visit reveals the British Royal Family are not fit for purpose
14. How Wikipedia has been turned into FAKE NEWS
15. What did Winston Churchill think of Islam?
16. Brexit: There is a war on for your mind.
17. The Jack Report - Understanding Thai Politics
18. SACK the MPs and win back British DEMOCRACY
19. Hey Khan, Your job is toilets and parking, not BREXIT or Trump
20. How Boris can save BREXIT, the Tory Party AND himself
21. Great Britain should welcome its closest ally with open arms
22. UK political parties on the verge of ANNIHILATION
23. Open border advocate George Clooney flees migrant towns
24. Conservative and Labour Parties are ALREADY DEAD
25. The disgrace of Gary Lineker and the BBC
26. The importance of health insurance when you are dead