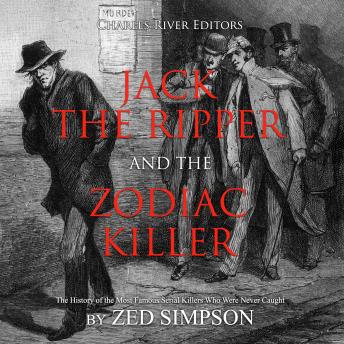 Jack the Ripper and the Zodiac Killer: The History of the Most Famous Serial Killers Who Were Never Caught

There have been a countless number of serial killers throughout history, and certainly more prolific ones, but the timing, circumstances, and unsolved nature of the case continue to make Jack the Ripper the most famous serial killer in history. The murders came at a time when media coverage could be both more acute and more widespread, and it allowed the public a closer look into how police agencies operated at the time, exposing both their strengths and shortcomings. Of course, the lack of modern forensics hamstrung the investigators in the late 19th century, and while the police file for the case was extensive and active for several years, much of the evidence disappeared from the file without explanation, possibly as souvenirs. Despite the fact the police interviewed thousands and considered hundreds of suspects, they were never able to arrest anyone for the murders. The Jack the Ripper case continues to fascinate historians and amateur sleuths so much that people have dubbed themselves Ripperologists, and since nobody knows for sure who the killer was, every aspect of the crimes is up for discussion, down to who the actual victims of the Ripper were and whether there was actually more than one Ripper.

The idea that there was an unhinged serial killer on the loose in California in 1968 was confirmed when he began writing letters to the police and the newspapers, not only claiming responsibility for these killings but for others that either had been or would be committed. After he stabbed a third couple and then shot a cab driver in cold blood, he began to send more and more letters. These, like the earlier ones, were signed with a symbol understood only by the killer, a man who called himself “Zodiac.” In addition to sending cryptic letters that authorities had to decipher, the Zodiac Killer used them to both taunt people and threaten more violence, warning that a failure to publish what he would wrote would lead to more.

This title is due for release on February 23, 2020
We'll send you an email as soon as it is available!