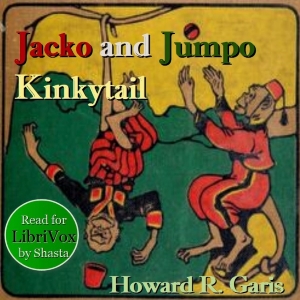 Once upon a time, not so very many years ago, there were two little monkey boys who lived with their papa and mamma off in the woods in a funny house at the top of a tall tree. These little monkeys were the cutest and most cunning chaps you would want to see, even if you went in an airship to the circus.

I have already told you something about one of them—a red monkey—who traveled with Uncle Wiggily Longears, when the old gentleman rabbit was going about, seeking his fortune. Well, this red monkey's name was Jacko Kinkytail; and his tail, as were the tails of all his family, was all twisted up in kinks. That's how Jacko got his last name—Kinkytail. His brother's name was Jumpo, and Jumpo was colored green. The reason for that was this: Once Jumpo's mamma bought him a green balloon at the circus. Jumpo was a little baby then, and he didn't know any better than to try to eat the green balloon. Perhaps he thought it was candy. At any rate, before his mamma saw him he had chewed nearly half of the balloon, and he soon turned a pretty green color like the leaves on the trees. Oh! his mamma and papa felt dreadful about it, and they did everything they could to get the color out of the little monkey, but they couldn't, and green he stayed.

"But it doesn't much matter," said Jumpo's papa, "for as long as Jacko is red I think it is nice to have his brother colored green. They look so odd and queer when they go out walking together." "Oh, but think of having one's children red and green, like some flag," cried Mamma Kinkytail. However, it couldn't be helped, so now I'll tell you some stories of Jacko and Jumpo.