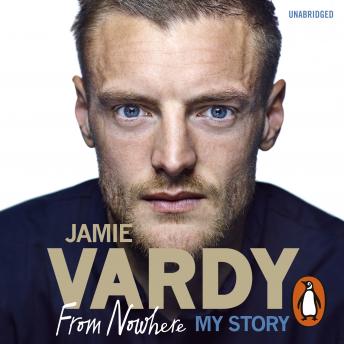 Jamie Vardy: From Nowhere, My Story

The official autobiography of Jamie Vardy.

An ordinary lad from Sheffield, Jamie Vardy has become known as an against-the-odds footballing hero the world over. Yet a few years ago, things couldn’t have been any more different. Rejected as a teenager by his boyhood club, Jamie thought his chance was gone. But from playing pub football and earning £30 a week at Stocksbridge Park Steels, while still working in a factory, his off-the-cuff performances saw him rise.

Jamie had a wild and turbulent youth, something he doesn’t shy away from. But football became his saving grace and, once he filled his boots with goals at FC Halifax Town and Fleetwood Town, he moved to Leicester City. With a growing sense of focus, Jamie put his head in the game. After the miracle of surviving relegation, Leicester set out on their fairy-tale season. The team of unlikely outsiders bonded together to achieve the unthinkable: Jamie set the record as the first player to score in 11 consecutive Premier League matches and Leicester beat odds of 5000-1 to become champions. Defying all expectations, this is the story of the boy from nowhere who reached the top in his own unflinching, honest words.

“Even now there are moments when I shake my head at the madness of it all – going from the factory floor and playing Sunday morning pub football with my mates, to scoring for my country against the World Cup winners in Berlin. It's the stuff of dreams. It hasn't always been an easy journey, some doubted that I was capable, and at times I was probably guilty of not helping myself, but nobody can question my passion for football or my commitment once I set foot on the pitch. There is so much that people don’t know and I look forward to sharing all of that and more in what I hope will be an inspiring story.” Jamie Vardy

Jamie Vardy: From Nowhere, My Story