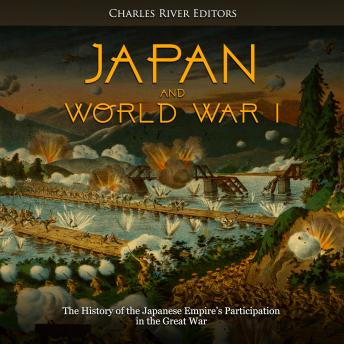 Japan and World War I: The History of the Japanese Empire's Participation in the Great War

In the Second World War, Japanese forces ranged over an immense portion of the globe, from Hawaii to Sri Lanka, but during World War I, Japanese naval forces spanned an even larger portion of the globe. Japanese warships escorted troopships carrying Australian and New Zealand Army Corps troops to the Middle East, Japanese cruisers hunted German commerce raiders in the Indian Ocean, the Bay of Bengal and all over the Pacific, and Japanese destroyers plowed Mediterranean waters as they escorted British convoys from Egypt to Gibraltar and searched for German and Austrian submarines. Japanese troops besieged the German citadel of Qingdao in China, forcing that German colonial city and naval base to surrender, and through it all, Japanese naval forces stood guard off Mexico, Hawaii and the American West Coast.
All of this was accomplished with by far the fewest military losses of any of the major Allies. Japan lost perhaps 4,000 soldiers and sailors during the war, while the French and Germans lost several million. For comparison, tiny Montenegro had 20,000 World War 1 casualties, Portugal 33,000, and Bulgaria suffered 267,000. Indeed, the Japanese losses in World War I represented a small fraction of the losses incurred in the Russo-Japanese War of 1904-1905. Yet Japanese strategic gains were far greater that what was obtained in the previous war, as they took the German North Pacific islands, they had a relatively free hand to exploit China, and they gained an uneasy peace with the young Soviet Union. In short, World War 1 brought Japan recognition as one of the world's primary military and economic powers.
Japan and World War I: The History of the Japanese Empire's Participation in the Great War analyzes the actions of the forgotten ally, and how Japan's participation helped set the stage for its expansion across the Pacific.

Japan and World War I: The History of the Japanese Empire's Participation in the Great War