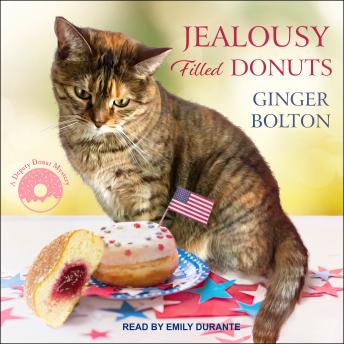 When a firecracker becomes a murder weapon, Emily Westhill pursues a killer with a short fuse . . .

It is a truth universally acknowledged-cops and donuts go together. Exhibit A: Deputy Donut Cafe, owned and operated by detective's widow Emily Westhill and her father-in-law, the retired police chief of Fallingbrook, Wisconsin. Named after Emily's adored and adorable tabby, the donut shop is a favorite among cops, firemen, and EMTs, as well as tourists and townspeople. So, when Fallingbrook needs donuts for their Fourth of July picnic, Emily's shop gets deputized.

But a twisted killer has found another use for Emily's treats. At the picnic, a firecracker is hidden in a stack of raspberry-filled donuts and aimed at the unwitting queen of the festivities. When it explodes, she is killed. Having her jelly donuts involved puts Emily in a sticky situation, and when a shady shutterbug tries to frame her with incriminating photos, she finds herself in quite a jam. To preserve her freedom and her shop's reputation, Emily needs to solve this case-before the fuse-lighting felon goes off again . . .