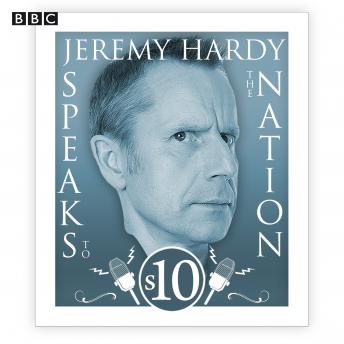 Jeremy Hardy Speaks to the Nation: The complete Series 10

Jeremy Hardy returns to the airwaves with four broadcasts of national comic import.

1. “How To Eat Food” In order to help explain one of our most fundamental acts as human beings, Jeremy picks up the topic of food with the chopsticks of enquiry and then drops it on his trousers of former cleanliness. Helping him tackle the subject will be special guests Vicki Pepperdine and Paul Bassett Davies

2. “How To Define Oneself In Terms Of Regional, Cultural And Geopolitical Identity Without Tears” In this post-Scottish-Independence referendum world, Jeremy dispassionately examines the questions of nationality, identity and accents. The noo. Helping him get to grips with the new world are Susan Murray and Moray Hunter.

3. “How To Be A Good Citizen” Jeremy attempts to understand citizenship, to examine the State and to spell surveillance. Looking over his shoulder at the script will be Gordon Kennedy and Carla Mendonça.

4. “How To Be Better, Theologically, Socially, Nationally, And In Terms Of One's Own Personal Development, Responsibility And Interaction With The Fellow Humans With Whom We Share This Fragile Planet An Ting”. Using just the Bible, the Monarchy & Audrey Hepburn, Jeremy Hardy promises to build a whole new you. Helping him along will be Paul Bassett Davies & Carla Mendonça

Jeremy Hardy Speaks to the Nation: The complete Series 10