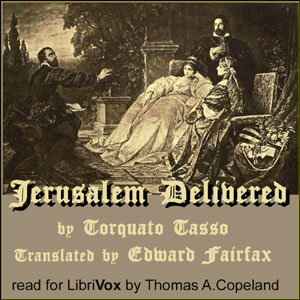 Narrated By: Thomas A. Copeland

The First Crusade provides the backdrop for a rich tapestry of political machinations, military conflicts, martial rivalries, and love stories, some of which are complicated by differences in religion. The supernatural plays a major role in the action. Partly on this account, and partly because of the multilayered, intertwined plots, the poem met with considerable contemporary criticism, so Tasso revised it radically and published the revision under a new name, La Gerusalemme Conquistata, or "Jerusalem Conquered," which has remained virtually unread, a warning to authors who pay attention to the critics.

The original poem influenced Edmund Spenser, whose unfinished epic, The Faerie Queene, is still more complicated in plot than Tasso's poem and, being an allegory, affords the supernatural an even greater share in the action. In Milton's Paradise Lost, the council in hell (first half of Book II) owes much to Tasso's similar scene in Book IV. (Someone with sufficient background in Old English might profitably compare the tirade of Satan in Book IV to the remarkably similar speech of Satan in the Anglo-Saxon Genesis.) Moreover, Milton's decision to write in English rather than in Latin, then the language of international discourse, was due in part to his visit to Tasso's patron, Giovanni Battista Manso, who advised him as he had advised Torquato Tasso before him, to dignify his native language by employing his talents in bold defiance of custom and precedent. Had Petrarch had the benefit of Manso's advice, his great epic, The Africa, might now eclipse his off-hour doodlings, the sonnets about Laura.

The text is the Gutenberg Project's version, corrected in certain places by consulting editions, also in the public domain, published in 1749, 1844, 1845, and 1901; A Dictionary of the Italian and English Languages, by Joseph Baretti (Venice, 1795); The Oxford English Dictionary; and an edition of La Gerusaleme liberata itself (Paris: Victor Masson, 1836). (Summary by Thomas A. Copeland)

This title is due for release on September 22, 2016
We'll send you an email as soon as it is available!