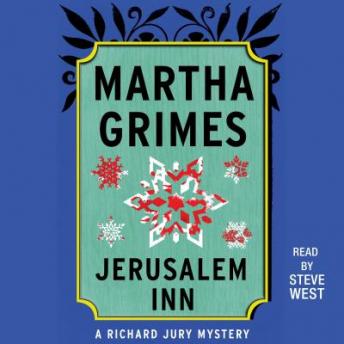 From the rough but colorful pub that provides the novel’s title, to the snowboard Gothic estate nearby, the chilly English landscape has never held more atmosphere-or thwarted romance. And Jury will never have a more mysterious Christmas.
Five Days Before Christmas – On his way to a brief holiday (he thinks) Jury meets a woman he could fall in love with. He meets her in a snow covered graveyard-not, he thinks, the best way to begin an attahcment.

Four Days Before Christmas – Jury meets Father Rourke, who draws for him the semiotic square-”a structure that might simplify thought,” says the priest, but Jury’s thoughts need more than symbols.

Three Days Before Christmas – Melrose Plant, Jury’s aristocratic and unofficial assistant, arrives at Spinney Abbey, now home to a well-known critic. Among the assembled snowbound guests he meets: Lady Assington, Beatrice Sleight, and the painter Edward Parmenger. When they all assemble in the dining room, Lady Assington announces, “I think we should have a murder.”