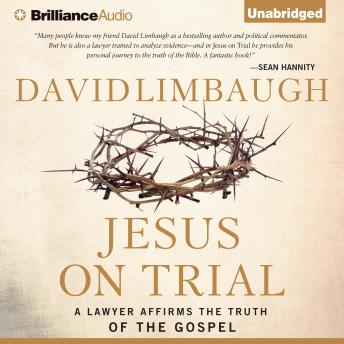 Jesus on Trial: A Lawyer Affirms the Truth of the Gospel

From popular culture to the halls of academia, Christianity is under attack. The Old Testament’s accounts of history are often dismissed as myths, while the gospels are frequently derided as a fairy tale. But the critics’ arguments are far weaker than they first appear. In Jesus on Trial, #1 New York Times bestselling author David Limbaugh confronts the skeptics head-on. Applying his lawyer’s eye to the evidence, he produces powerful arguments demonstrating the Bible’s truthfulness. In this audiobook Limbaugh shows: • Abundant evidence that the Bible is the most historically reliable text among all ancient writings • Why the gospels’ account of Jesus’ resurrection is far more convincing than any other explanation of His fate • The Bible’s astonishing feats of prophecy and the skeptics’ feeble attempts to dismiss them • How the critics’ arguments against Christianity are infected with ideological bias • The increasing archaeological evidence affirming the biblical account of history • How Christianity is not only compatible with scientific methods, but was instrumental in the birth of modern science Limbaugh knows the skeptics’ arguments well—because he used to be a skeptic himself. In this audiobook he describes his own faith journey to Christianity, explaining in moving detail the arguments, evidence, and biblical passages that caused him to embrace Jesus Christ as his Lord and Savior. Part personal testimony, part Christian apologetic, part informative evaluation of the facts, and part primer on theology, Jesus on Trial provides Christians with a remarkable reaffirmation of their faith—while offering a challenge to skeptics that cannot be ignored.

Jesus on Trial: A Lawyer Affirms the Truth of the Gospel