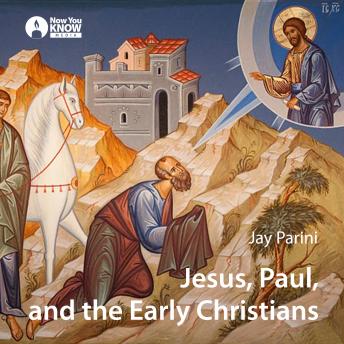 Jesus, Paul, and the Early Christians

Jesus comes to me and you through thousands of years of imagery and writing—a vast web of material that often does more to obscure than reveal. Now, one of America’s greatest living storytellers retells the greatest story ever told with unprecedented clarity and insight.

An accomplished poet and author, Jay Parini has earned widespread recognition as an innovator in the genre of biographical fiction. Among his books on towering literary figures like John Steinbeck, William Faulkner, Herman Melville, and Robert Frost, he is perhaps best known for his novel about Leo Tolstoy, which was adapted into the 2010 Academy Award-nominated film The Last Station. Now, in Jesus, Paul, and the Early Christians, Parini bends his narrative talents to one of the most storied men in all of history: Jesus Christ.

Parini takes what he calls a “mythic” approach to religion. Throughout Jesus, Paul, and the Early Christians, you will contemplate the rise from history to mystery. In a word, this involves viewing myths as tears in the fabric of reality. Parini shows you how the literal events of history take a backseat to the powerful and enthralling symbolic meaning of the lives of Jesus, Paul, and others.

Eloquent and introspective, Parini proves an entertaining guide to early Christianity, its root meanings, and its life-changing possibilities. As you gain deep insights into Jesus’ humanity, you will transform your relationship with God and the eternal life.

Jesus, Paul, and the Early Christians

This title is due for release on February 11, 2019
We'll send you an email as soon as it is available!