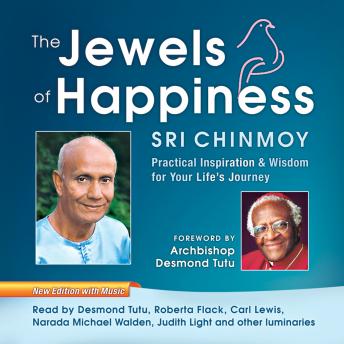 The Jewels of Happiness: Practical Inspiration and Wisdom for Your Life's Journey

Prose -- Poetry -- Music
Sri Chinmoy's insightful words, elegant prose and deep wisdom form a tapestry of inspiration for people from all walks of life. This new edition is enriched by the music of Sri Chinmoy arranged and performed by artists from many nationalities. Sri Chinmoy was leader of the Peace Meditation at the United Nations for 37 years at the invitation of Secretary-General U Thant and founded a wide range of innovative, creative and grassroots initiatives.

Each chapter is performed by an internationally acclaimed dignitary, athlete & artist.

Epilogue: Happiness - Nripal Eric Petersen, the editor of Light and Liberty, a best-selling collection of life-lessons drawn from the writings of Thomas Jefferson - along with Nidrahara Kathryn Rhodes, yoga teacher who is married to Nripal.

Jewels of Happiness: Practical Inspiration and Wisdom for Your Life's Journey

This title is due for release on August 27, 2014
We'll send you an email as soon as it is available!