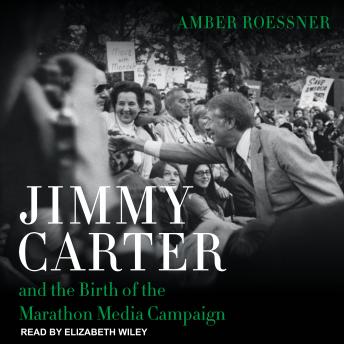 Jimmy Carter and the Birth of the Marathon Media Campaign

With the rise of Jimmy Carter, the 1976 presidential election proved a transformative moment in US history, heralding a change in terms of how candidates run for public office and how the news media cover their campaigns.

Amber Roessner's Jimmy Carter and the Birth of the Marathon Media Campaign chronicles a change in the negotiation of political image-craft and the role it played in Carter's meteoric rise to the presidency. She contends that Carter's underdog victory signaled a transition from an older form of party politics focused on issues and platforms to a newer brand of personality politics driven by the manufacture of a political image.

Roessner offers a new perspective on the production and consumption of media images of the peanut farmer from Plains who became the thirty-ninth president of the United States. Carter's miraculous win transpired in part because of carefully cultivated publicity and advertising strategies that informed his official political persona as it evolved throughout the Democratic primary and general-election campaigns. To understand how media relations helped shape the first post-Watergate presidential election, Roessner examines the practices and working conditions of the community of political reporters, public relations agents, and advertising specialists associated with the Carter bid.

Jimmy Carter and the Birth of the Marathon Media Campaign