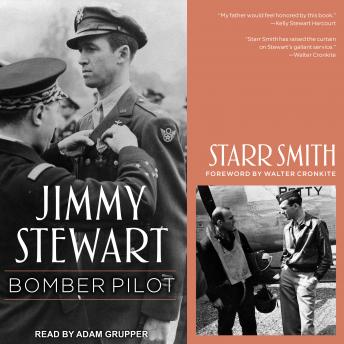 Of all the celebrities who served their country during World War II-and they were legion-Jimmy Stewart was unique. On December 7th, when the attack on Pearl Harbor woke so many others to the reality of war, Stewart was already in uniform-as a private on guard duty south of San Francisco at the Army Air Corps Moffet Field. Seeing war on the horizon, Jimmy Stewart, at the height of his fame after Mr. Smith Goes to Washington and his Oscar-winning turn in The Phadelphia Story in 1940, had enlisted several months earlier.

Jimmy Stewart, Bomber Pilot chronicles his long journey to become a bomber pilot in combat. Author Starr Smith, the intelligence officer assigned to the movie star, recounts how Stewart's first battles were with the Air Corps high command, who insisted on keeping the naturally talented pilot out of harm's way as an instructor pilot for B-17 Flying Fortresses and B-24 Liberators. By 1944, however, Stewart managed to get assigned to a Liberator squadron that was deploying to England to join the mighty Eighth Air Force. Once in the thick of it, he rose to command his own squadron and flew twenty combat missions, including one to Berlin.