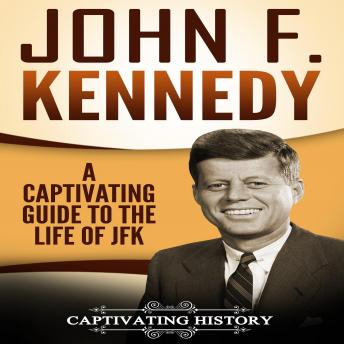 John F. Kennedy: A Captivating Guide to the Life of JFK

Gallup's List of Widely Admired People of the 20th Century places President John F. Kennedy in the third slot, behind Martin Luther King, Jr., and Mother Teresa. Needless to say, President Kennedy's name is one that will not soon be forgotten.

Many people will simply recall him as the handsome president who reigned for a short while before his unfortunate death at the hands of an assassin in Dallas, Texas. They may recall he was the youngest president to have been sworn into the presidential office or he dealt with issues such as the Cuban Missile Crisis.

The general American public and the world know much about the surface of JFK's life - they know of his affairs and his ill health - but they often do not recall anything about who he was as a person or how he interacted with his wife and family. This audiobook aims to unveil all this information along with many more captivating facts about the life of John F. Kennedy.

Listen to this audiobook now to learn more about John F. Kennedy!

John F. Kennedy: A Captivating Guide to the Life of JFK