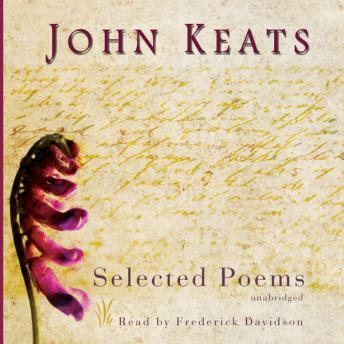 One of the most distinctive periods in poetry occurred in England early in the 1800s. This is now referred to as the age of romanticism, a movement which rebelled against the neoclassical forms and celebrated the imagination as a spiritual force. John Keats was a prominent shaper of this new movement, and as such, he was not without his critics.
"I think I shall be among the English Poets after my death," he soberly prophesied. Indeed, Keats suffered an early tragic death of tuberculosis at the age of twenty-five but today is recognized as the archetypal romantic genius who explored the limits of the imagination and celebrated the pleasures of the senses.
Unlike Shelley, Keats was not a political poet; his prime passion was for art. His muse was the goddess of beauty and truth, and his worship of her found its finest expression in his immortal odes, which stand unique in literature, unexcelled in perfection.
The poems collected here are: 1. 'Oh Chatterton! How Very Sad Thy Fate" 2. "O Solitude! If I Must with Thee Dwell" 3. "To One Who Has Been Long in City Pent" 4. "On First Looking into Chapman's Homer" 5. "To My Brothers" 6. "Great Spirits Now on Earth Are Sojourning" 7. "On the Grasshopper and Cricket" 8. "After Dark Vapours Have Oppressed Our Plains" 9. "On Seeing the Elgin Marbles" 10. "On the Sea" 11. A Selection from "Endymion" 12. "To Mrs. Reynolds' Cat" 13. "On Sitting Down to Read King Lear Once Again" 14. "When I Have Fears That I May Cease to Be" 15. "Lines on the Mermaid Tavern" 16. "O Thou Whose Face Hath Felt the Winter's Wind" 17. "For There's Bishop's Teign" 18. "On Visiting the Tomb of Burns" 19. "Old Meg She Was a Gipsey" 20. "This Mortal Body of a Thousand Days" 21. "There Is a Joy in Footing Slow across a Silent Plain" 22. "The Eve of St. Mark" 23. "Why Did I Laugh Tonight? No Voice Will Tell" 24. "Bright Star, Would I Were Stedfast as Thou Art" 25. "Hyperion: A Fragment" (Book I), II, and III) 26. "Hyperion: A Fragment" (Book I, continued; Book II, Book III) 27. "La Belle Dame sans Merci: A Ballad" 28. "Sonnet to Sleep" 29. "Ode to Psyche" 30. "Ode to a Nightingale" 31. "Ode on a Grecian Urn" 32. "Ode on Melancholy" 33. "Ode on Indolence" 34. "Lamia" (Part I) 35. "Lamia" (Part I, continued; Part II) 36. 'To Autumn" 37. "The Fall of Hyperion: A Dream" 38. "This Living Hand, Now Warm and Capable"